The Birds, the Bees, and the Dog 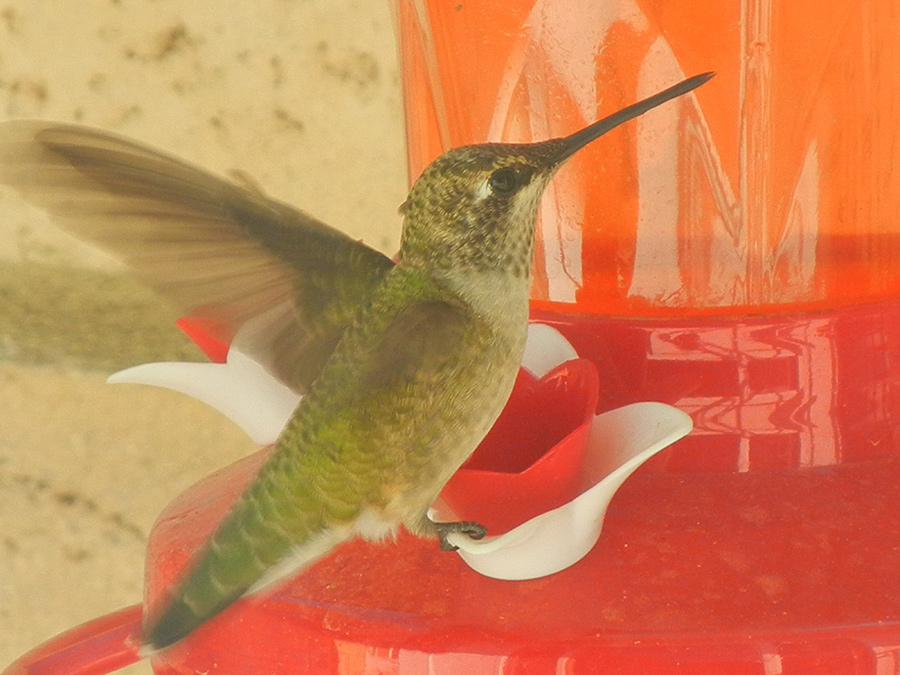 I see that look – the “What kinda craziness is she about to spew?” look. Okay, I didn’t really “see” it, but sensed it, because I felt it when I wrote it.  But I promise – there is no icky here – just animal observations.

We have lots of birds in our backyard.  I know it is by design, because I love birds.  I can’t tell you the names of the species unless I call my friend, Kitty, who knows the reference book front to back. But I can tell you who plays in my fountain and eats from my feeders.  We have “hummers”, little prisms, flashing in the sun as they dart from God-made to man-made nectar.

We have finches; males that sport yellow, orange, and red chests who vie for the attention of the less attractive brown and white females.  We have mourning doves whose songs can wake you from or lull you to peaceful sleep.

We have pigeons who make their presence known by “depositing” as they fly from roof to roof.  They will on occasion bathe in the large teal fountain, aka the aviary spa.

We also have lots of bees in our backyard – not quite by design, but by the foliage chosen by the previous owners.  There are flowers everywhere.  There are yellow, orange and burgundy Kangaroo Paws, Dwarf Bottlebrush, purple and yellow Lantana; ground cover that frames the edges of the patio.  There are tall Buddleia Black Night that sport three to five-inch upside down cones of lavender.  All of these draw bees; regular garden bees are the most prolific, but there are also large yellow bumble bees and black carpenter bees.

And then there is the dog.  His interaction with the other visitors is fun to watch.  The dog, “Stringfellow” is, depending on who you ask, either named after a character in Marvel Comics or the lead character Stringfellow Hawk in the television series, “Airwolf.”  The name means powerful man or strong fellow.  Either would fit our four-legged, tan and white, 75-pound American Pit Bull.

The backyard is his domain, or at least that’s what he thinks. He eats there, runs there, plays rope and ball there and leaves us “presents” to find there.  The birds and the bees are intruders in his little kingdom. How he reacts to each of the flying villains is quite different. He ignores the hummers, knowing his speed is no match for theirs.  A bark and a lung toward the finches and the doves sends them scattering, but he waits for the optimum moment – when he gets the most coverage for his efforts.

The bees are a different story altogether.  He tries to eat the garden bees, pouncing toward the low-lying Lantana.  I don’t think he’s ever met with success, because I think that he would have an instant change in the definition of that word.  He doesn’t seem to mind the yellow bees, but the black ones send him running.  The bees never come near him, but he runs, full speed for the cover of the patio table.  And not for the one in the center of the patio, but the one that my husband sits at – the one right by the back door.  Not only does he cower there, he whines like a baby…a 75-pound baby.  He doesn’t stop until someone lets him in the house.  So, he tries to eat the littlest things, flees from the middle size things and chases the big things.

This is their backyard ballet. It may not be Broadway worthy, but it’s free, and it has no blackout dates. I’ll save you a ticket, if you’d like.