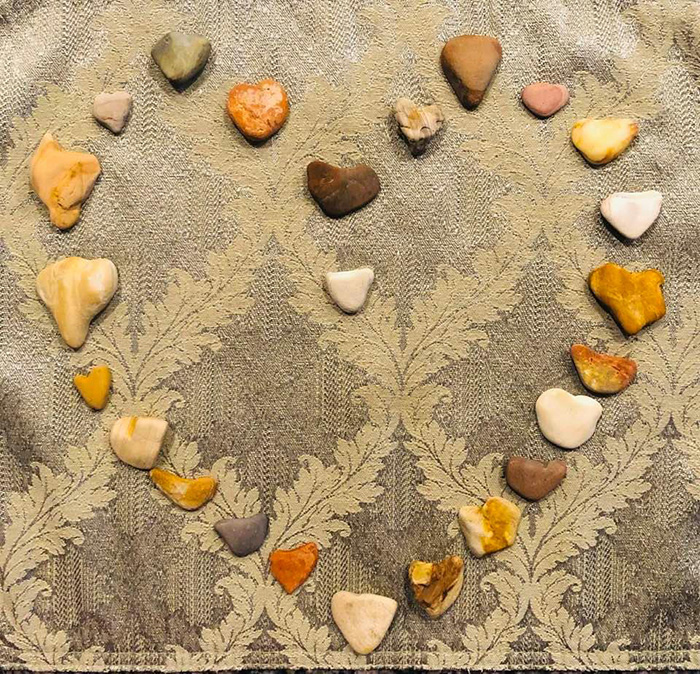 Whenever I walk the beach, I look for rocks that look like hearts. Some rocks have a very slight resemblance to hearts, and others…well, you just have to use your imagination.

None of these are beautiful, some are misshapen, even craggy looking. But sometimes those of us with the craggy hearts are the most in need of love.

I was often lashed out at as a funeral director.  It took time and the wise counsel of co-workers for me to understand that those people hollering at me were just venting their grief.  They needed a place to unload, and I was their vessel at that moment.  Once I realized that, I could relax, listen and try and walk them through the hurt.

I’ll never forget one Sunday that I was working.  I happened to be at the front desk when two men came in.  One was very agitated and barked at me.

“I’m the funeral director on duty this weekend.  How can I help you?”

“Well, then I guess this is for you.”

With that, he proceeded to drop a clod of dirt with a weed attached onto the computer keyboard.  I could have matched his demeanor, but what good would that have done?  Instead, I asked the gentlemen to join me in an office so we could talk and found out that they had traveled from out of state to visit their loved one, only to find the appearance of the site unacceptable to them.  I could have made excuses.  I could have told them about the mowing rotation and that there had been another service in that area – that the schedule had been modified.  But none of that would have mattered.  He needed someone to fuss at.  But after our talk and my promise to personally speak to the appropriate staff the next work day, he thanked me for listening and apologized for throwing the dirt.

We’ve all had that one person, or people who just seem to rub us the wrong way.  Are they singling us out or do they have some venting that they need to do?  It may be that they see something different in us.  They may see us as a “safe” person to talk to – even if they go about it the wrong way.

“You are the light that shines for the world to see.  You are like a city built on a hill that cannot be hidden.  People don’t hide a lamp under a bowl.  They put it on a lampstand.  Then the light shines for everyone in the house.  In the same way, you should be a light for other people.”