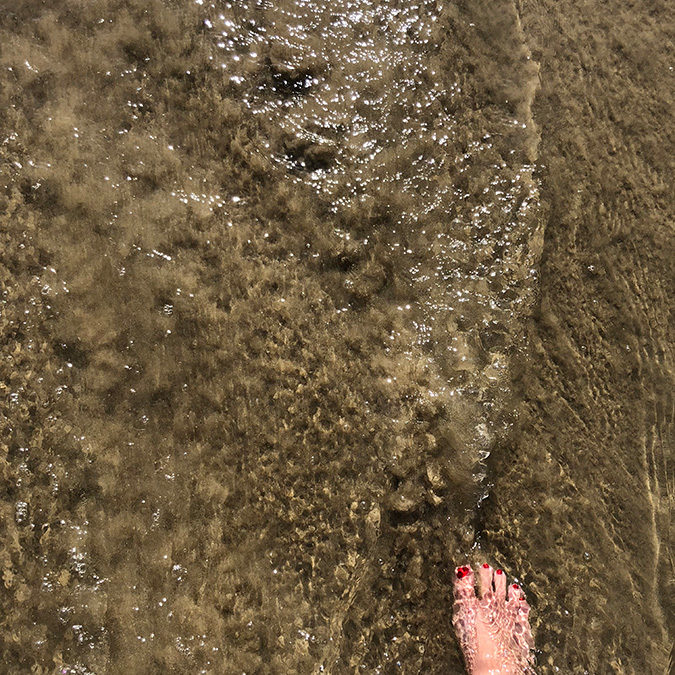 With three patios available in the common areas, each guest of the Bayfront Inn can choose the right one for them.  The “back deck” is secluded and has tables and umbrellas just outside the guest rooms.  The “lower deck” is ground level, but is protected from the wind by plexiglass.  The “upper deck” is higher, giving a better view of the bay, but little protection from the elements.

I’m a people watcher, and I don’t want to deal with the wind when I’m trying to read, so the lower deck is my go-to spot.  I found the perfect place to sit, and just as I settled in, I looked to the upper deck and greeted another guest.

The conversation began with me tugging my required mask down so I could be understood.

“It’s okay.  I’m not afraid of it.”  I knew she was talking about Covid-19, but I heard a tension in her voice that told me something was wrong.

“My mother just died – what day is this?”

“Tuesday.  She died on Tuesday. She developed a rare brain disease.  It hit her so fast.  We can’t even plan a funeral because they have to test her brain to see if it’s genetic. If it is, I’ll get it, and I’ll only have 15 years to live, because it surfaces in your early 60’s.  She was only 62. I just needed to get away.  My name is Cindy.”

Cindy and her childhood sweetheart, Dennis met at church.  They had both married and divorced others; reconnected through a dating ap, and had just been married a year when this happened.  He came out to join her which elicited a “Hello, my love” as he sat down.  Their connection was palpable.

Our conversation continued well past my allotted reading time, but before I left for the room and dinner, I asked if I could pray for them. We joined hands through the iron bars that surrounded the upper deck and we prayed – strangers joined by the grief of the loss of a parent, and the promise of a God who heals that grief.

Strike up a conversation.  You might be called to be a vessel of prayer for someone.

Part of our Morro Bay adventure was a dinner cruise aboard the Papagallo II, a small yacht owned by Chef Leonard and his wife Midge Gentieu.  We learned of this sweet couple from our children’s former babysitter who is a friend of theirs.  A wonder in the kitchen, Chef Len prepared an amazing meal starting with his award-winning clam chowder, and an appetizer of artichoke-jalapeño spread on a cracker, topped with smoked salmon. The buffet overflowed with Chicken Marsala, sweet and spicy ribs, Au gratin potatoes, salad, fruit, bread and lemon pound cake for dessert.

As we dined, we were serenaded by live music from Rick Jarrett.  His sultry low voice covered a variety of music genre’s and we often sang along. During one of his breaks, he told us that he had been singing for nursing and retirement homes for years, but that he had to stop due to the Covid-19 restrictions for those facilities.  It reminded me of my many years doing the same.  Music is a lifeline to so many of these folks. Some have loving families who stay in touch, but many more are left alone.  And while they may have people around them, too many feel abandoned.  Music connects them.  Music cheers them; warms them; reminds them what it is to feel.  They remember the songs and the life events that paralleled them.

Our first and last stop in Morro Bay is always Giovanni’s.  If you haven’t been there, it is a dockside outdoor casual restaurant and fish market.  They have fresh fish and staples in the market and the seafood is some of the best I’ve ever had.  You can purchase fish there and they will pack it in ice for you, or you can have it shipped anywhere in the US.  My favorites are the BBQ oysters with garlic butter and the clam chowder, but their menu is impressive.  My husband loves the “fish on a stick.”

On that particular day, my husband was resting and I decided to go for a walk down and back up the Embarcadero. Before heading to the room, I stopped at Giovanni’s to take in the sights and sounds of the bay.  Did I mention I’m a people watcher?

There was a young couple seated at the next table, bent over both their food and their hushed conversation.  That is, until a couple of gulls started squabbling a few feet away.

The young man looked up and over at the gulls. “Settle down, you two.”

I chimed in. “I read that the males don’t get the red dot on their bottom bill until they reach maturity.”

“Yeah, and those young studs aren’t just after the food” he said pointing to a mottled female.

I was stunned when the dialogue took a sharp left turn.

“We’re just here for the day.  My dad’s on hospice.  He’s been dying for three years.  We just needed a break from being care-givers.”

They were from Bakersfield.  We talked about which hospice agency they were using and that his father wanted to be cremated. Before I left, I gave them my contact information and let them know of some options they had.  I told them they could call if they had any questions.  That call came early the next morning before I awoke.  The message was short and tearful.

“My dad died this morning.  I don’t know what to do.”  I called back right away.  We talked.  I answered some questions, and after we hung up, I made a call on his behalf.  The next day I received another call.

“You might be an angel.”  He thanked me on behalf of the family and our time was done.  But as I mulled over his comment, I had mixed feelings.  While the complement was nice, I knew it was far from the truth.  I would never consider myself an angel.

What I did know was that I had decided years prior to try and be a vessel for God’s work.  I used to fight those promptings from Him out of fear of rejection, and sometimes I still struggle with that. But when I listen, when I say yes, He fills this vessel with what is needed for the moment. In that moment I was a vessel of knowledge.

We each have unique qualities.  We can each be a vessel to someone in need.