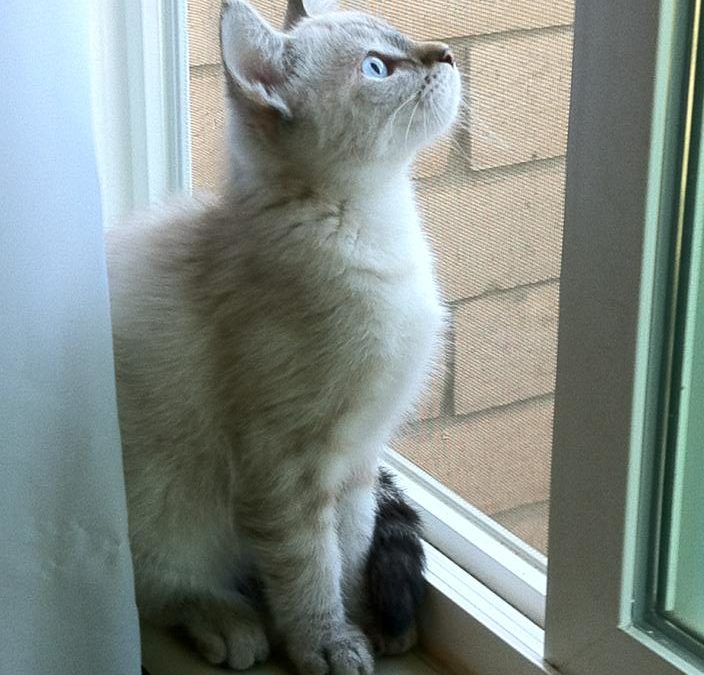 We just had to put one of our rescue cats down.  She came to us after the passing of my mother’s twin sister, Jean.  No one even knew that Aunt Jean had a cat until the family gathered to clean out her rental home.  Half starved, the solid gray feline was so small, so skinny, we just knew she had to be a kitten.  We were sure that after our vet checked her out, someone would want to adopt her right away.  Well, the joke was on us. We were told that she was “unadoptable” because she was at least 16 years old and had lost most of her teeth. Our two-cat home became a three-cat home.

Our granddaughter, Sophie named our new addition Arby. I thought she must love the fast food establishment, but her mother said she had never been there. Who knows why a child does what they do, but Arby it would be. Sophie wanted to take Arby home, and our daughter considered it until the skittish cat swatted at and scratched Sophia’s cheek.  With tears running down her sweet face, not so much from the scratch as from sadness, Sophie said, “Nana, Arby needs a different home because she doesn’t like me.”  And Arby stayed.

She received a second name, an alias if you will, from other family members.  Because of her pronounced chin and in spite of her gender, she was dubbed Jay Leno. It didn’t matter what name we called her by, she loved all the human members of our family.  But she never warmed up to Spazz and Dusty, our other rescues, nor they to her. But Arby stayed.

Because of her lack of teeth and her albeit temporary lack of food before we found her, she developed the habit of scarfing her meals while snarling at her “sisters.”  And more times than not, she later gave back “presents” for us to find in secret places. But Arby stayed.

Then the unavoidable happened, and our almost 19-year-old cat developed kidney failure. She began taking care of business everywhere but the appropriate place, drinking from the toilets, the sinks and every unattended glass. She became lethargic, lost the sheen in her coat and quit eating. But Arby stayed.

The decision was difficult and long in coming, and being the coward that I am, I left the deed of her final car ride to my husband.  I felt my heart catch when an hour later, he walked back through the front door with the now empty carrier in hand and said in a clipped tone, “It’s done.”  But Arby stayed, until she couldn’t.

I can’t help but ponder the future. When I am old and can’t control my functions, act inappropriately and fight with others, will society say it’s time for my final ride?  Will someone take me away, come back empty-handed and say, “It’s done” to my family?

Just for the record, and in case anyone asks; I want to stay.